Ebizimor “EGBEZI” Ogbe – never forget that name- is set to break grounds in the Hip-Hop world and sooner than you expect too.

He’s dropped this at a perfect time due to two factors; This is a time in which Hip-Hop music is on the up-rise after being on the under for so many years, this is many thanks to MCs like MI Abaga, AQ, Vector, SDC, Paybac and a whole lot more.

Second reason as to why there wasn’t a better time than this is because the timeline between late last year and now have highlighted the success of debut/sophomore projects and the amount of ground still-rising artists have covered, popular examples include the success of Fireboy, Oxlade, Terri, Chike and a string of others.

Like earlier stated, Hip-Hop has dominated 2020, we hardly get times like this and it is imperative that rising Hip-Hop MCs take advantage of the direction of the current waves. Egbezi took advantage. Just like its title suggests, this is a project that clearly demonstrates the growth of Egbezi as a rapper from his debut album “No Fear: The Inoculation Album“.

Afrocentric is an album that centers around self discovery and the manipulation of bars/punchlines to pass messages such as The Society’s situation, Motivation, Bragging rights, Getting famous , even Love and so much more. All these while on Hardcoreproduction and an equally beautiful and impressive feature list including Paybac Iboro, Payper Corleone and Azikey.

All the components that make a Rap/Hip-Hop project are in good form on Afrocentric, Lyricism is the type that makes you want to check Google, the fact that I have listened to this multiple times showcases its replay value. Rap technicality and Impact are also decent while its production could have been better (Still solid anyway!). 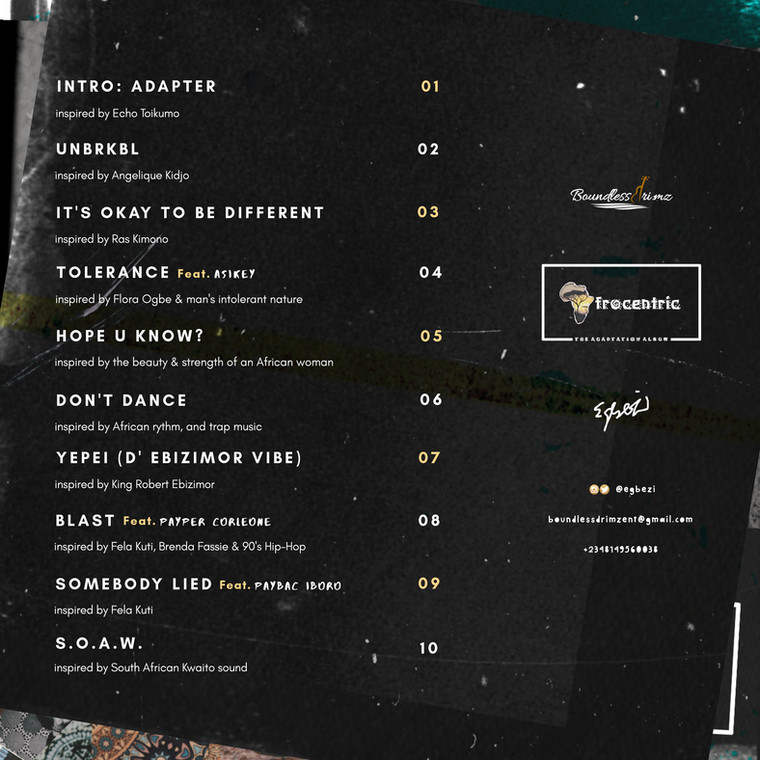 ‘Adapter‘ introduces us to the album, the 1 min 30 seconds track is just Egbezi free-styling to a loopy sound. Next Up ‘Unbrkbl‘ pays homage to the early 2000s Naija Hip-Hop while its chorus gives Angelique Kidjo vibes, ‘Its Okay To Be Different‘ awakens you to this project, although he struggled with the mid-pace of the beat, the catchy keys and his name calling of Rap legends just has a crown to it.

‘Tolerance‘ is a fans’ favorite, this is because a lot of things connect on this track, the amazing vocals of featured artist Asikey just compliments the slow beat while Egbezi raps passionately from his heart, 10/10 highly recommend. ‘Hope U Know?‘ is a love rap song, yes you heard right, here he sings about hustling just so he and his partner could live an amazing life. Getting to the second half of the album begins with ‘Don’t Dance‘ with a very catchy chorus and lyricism that proves this is for the streets, then one of the best songs on the project ‘Yepei‘ owns a production that just goes crazy with drums and bass keys, Egbezi just keeps going with the flow.

Payper Corleone as a feature on any Hip-Hop project is a W even for the biggest rappers in Africa, his influence resonates into making ‘Blast‘ arguably the best Rap song on here; it contains the best flow and production on the album, and punchlines for days from both Paybac and Egbezi, Track 8 is a must listen! Paybac Iboro off the success of his CULTalbum is one of the hottest Hip-Hop prospects out there and he showed that on ‘Somebody Lied‘, the Fela Kuti-inspired production just gives room for the rappers to swim freely with lyrical flows. How about a Motivational song to end the album? Egbezi finishes the album in the best possible way with ‘S.O.A.W‘ which means ‘Soul of a Winner‘. He talks about his rise to where hes gotten to now and how he grew up to become an Hip-Hop MC with Two Album Projects at a young age of 22.

In Conclusion: The massive talent of Egbezi is the template on which his Hip-Hop Career will be propelled, all this under the impressive tutelage of a proper Record Label which is Boundless Dr:mz Entertainment.